Today is World WiFi Day and at Fon we’re excited to announce that we have significantly expanded beyond residential networks. With a network of over 20 million hotspots, we have increased our footprint by aggregating many WiFi networks with hotspots in prime locations such as airports, convention centers, shopping malls, train stations, and restaurant chains.

As active members of the Wireless Broadband Alliance (WBA), we are delighted to be celebrating World WiFi Day 2017 by making this announcement. Our CEO Alex Puregger commented, “Together with leading operators around the world, Fon has built the largest WiFi sharing network. But we want to go even further to help users get to WiFi wherever and whenever they need it. Therefore we’re signing agreements with WiFi operators in all kinds of locations, so we can give our partner’s end-users access to WiFi, with the same great user experience as they have from their operator’s network.”

Our expanding network now boasts coverage in over 21 million locations! End-users can connect to Fon WiFi in over 250 airports around the world, in addition to thousands of transport stations, hotels, and venues. 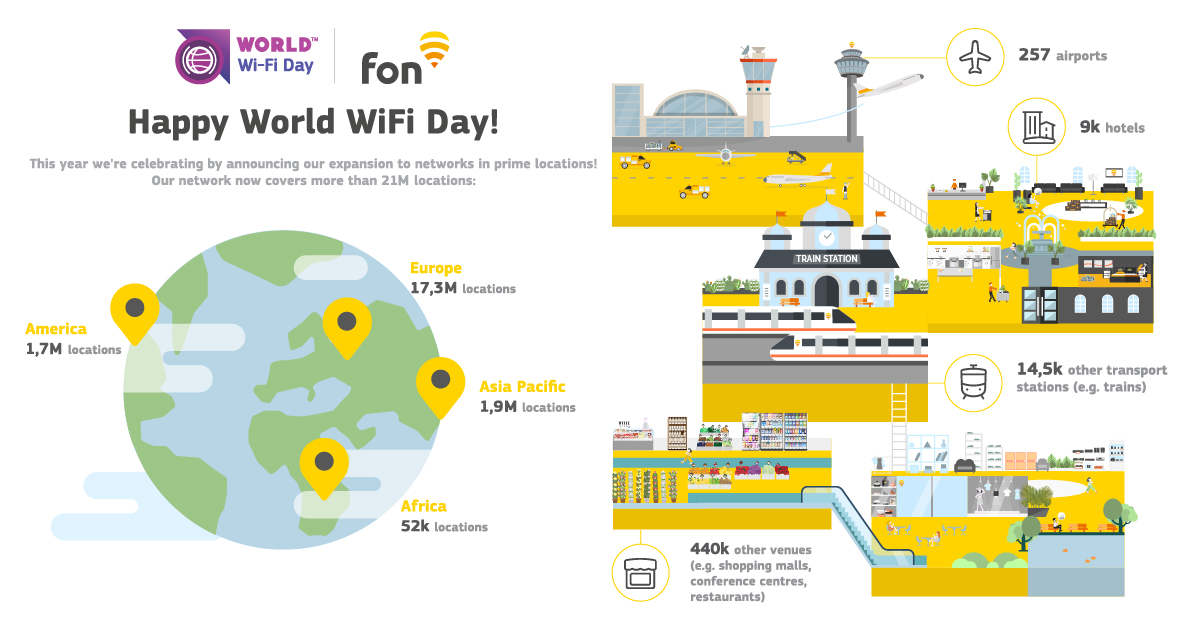 Our industry-leading Roaming Hub enables this seamless connectivity between Fon and other global WiFi networks. The integration process is simple and efficient, with all commercial and technical aspects managed to the latest industry standards. The Hub also features a user-friendly reporting tool, Fon Network Insights, which is designed specifically for WiFi partners to accurately monitor their network’s usage.

Access to these new networks in prime locations creates an even more compelling point of differentiation for Fon’s clients, including telcos, MVNOs, IoT companies and app developers, who are looking to add value for their customers through WiFi. Fon offers a number of connectivity options for these clients: an SDK that can be integrated into any app; a customizable Connection Manager app; or promo codes, which are redeemed by end-users in exchange for timed access passes.

We’ll be expanding our footprint even further in the coming months: If you’re interested in joining Fon’s growing WiFi network, get in touch!

This website uses cookies to improve your experience while you navigate through the website. Out of these, the cookies that are categorized as necessary are stored on your browser as they are essential for the working of basic functionalities of the website. We also use third-party cookies that help us analyze and understand how you use this website. These cookies will be stored in your browser only with your consent. You also have the option to opt-out of these cookies. But opting out of some of these cookies may affect your browsing experience.
Necessary Always Enabled

Any cookies that may not be particularly necessary for the website to function and is used specifically to collect user personal data via analytics, ads, other embedded contents are termed as non-necessary cookies. It is mandatory to procure user consent prior to running these cookies on your website.