Fon, COMBO, & the demonstration of Next-Gen fixed and mobile architecture

Fon, COMBO, & the demonstration of Next-Gen fixed and mobile architecture

Last month, Fon had the pleasure of participating in a public demonstration put on by COMBO, a European project, that explored new flavors of centralized and distributed Next Generation Point-of-Presence (NG-POP) architecture. It was a great demonstration that was very well received, but before we get into the specifics of the event, let’s start with the basics:

First off, what is COMBO? It’s an international European project that was started in 2013. It stands for COnvergence of fixed and Mobile BrOadband access/aggregation networks.

What does it do?
It focuses on the concept of converged Fixed & Mobile networks in different densities – dense urban, urban, and rural. COMBO proposes a new architecture called Next-Generation Point Of Presence (NG-POP) that aims to unify fixed, mobile, and WiFi network management. 5G network architecture will have to deal with increasing traffic and application changes – and COMBO is working on the evolution of this. The goal of POP-NG is to become a core entity in operator networks.

Who is involved?
COMBO is made up of 15 partners from 7 different countries. There are 5 network operators, 5 manufacturers/service providers, and 5 academic/research institutions involved. These players come from all across Europe: France, Germany, Italy, Sweden, Hungary, Turkey, and of course, Fon’s home country – Spain!

What is Fon doing?
Fon is a crucial part of the project. We are actively participating in the design and development of the entities involved in user authentication. To do this, we provide technologies like Hotspot 2.0 and our experience with different EAP mechanisms – specifically, those related to authentication credentials with SIM cards.

The event:
After 7 weeks of integration and measurements on COMBO’s demo platform, 5 booths demonstrated key transport and functional enablers of fixed mobile network integration. Some of the demonstrations included:

1. The unification of transport resources in fixed, mobile, and WiFi access/aggregation networks thanks to optical infrastructure supported by an 18-km field fibre ring

2. The concept of Universal Access Gateway (UAG) as a set of virtualized network functions hosted in NG-POP

3. Allowing unification of user authentication and data path management for all fixed, WiFi, and mobile users.

The event demonstrated typical use cases that showed how the user experience could be improved in multi-access situations. To illustrate, they used advanced virtualized network functions of UAG such as universal AUThentication (uAUT), universal Data Path Management (uDPM), and uDPM-assisted distributed caching. 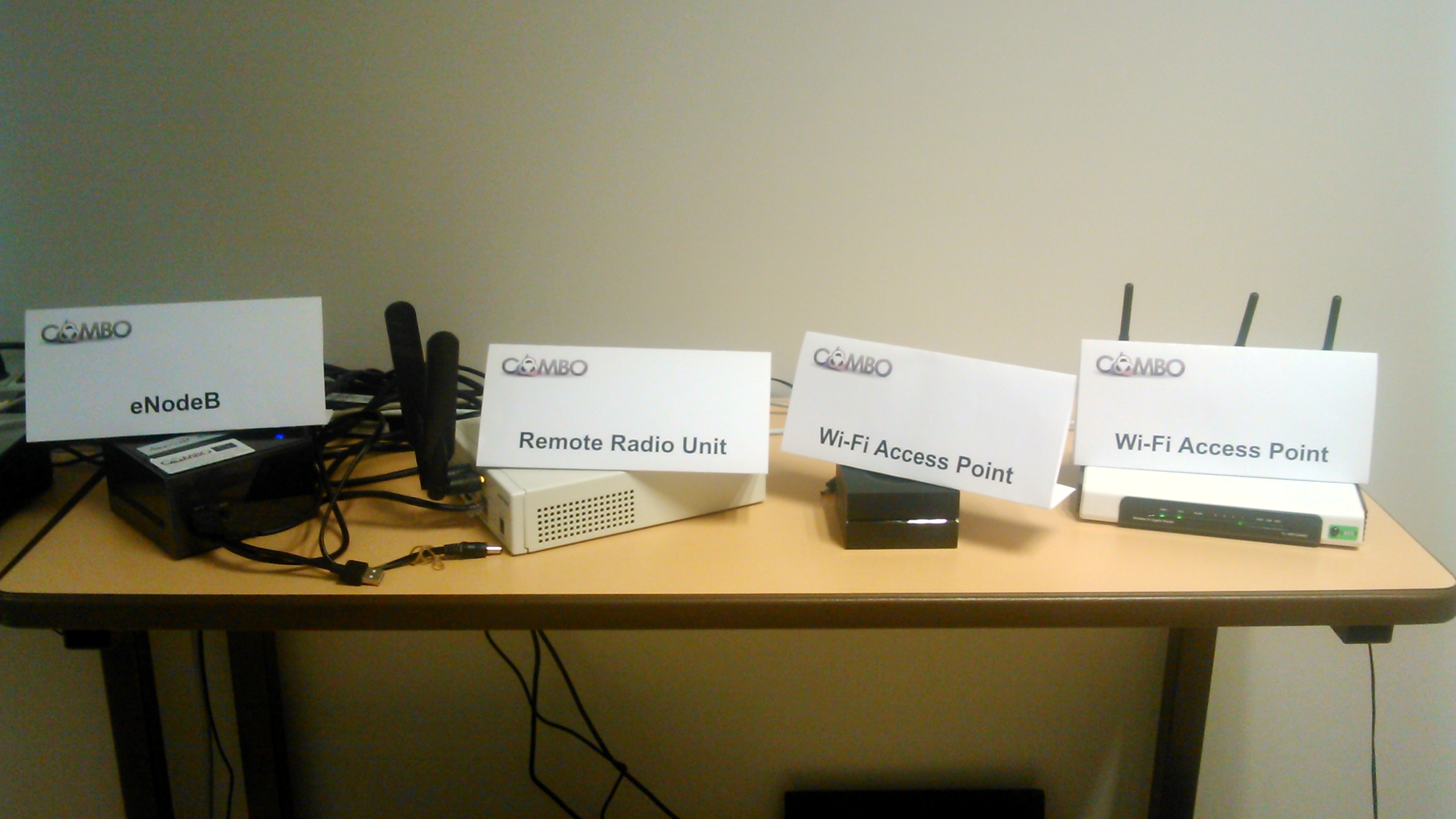 What did they find?

1. One use case showed seamless authentication of the user on several access types (WiFi, mobile data, etc.) with the same credentials

2. Another showed the combined use of two access types by a given user session and its individual traffic flows

3. A third demonstrated how distributed caching units assisted by uDPM functions will allow an improved performance for video streaming applications

Success!
The COMBO demo passed its technical and distribution objectives with flying colors. The experimental results were fruitful and the event attracted around 40 external visitors.  The next phase of the project will be to launch COMBO’s vision on 5G standardization. Stay tuned for more innovations!

Want more info on the project and the demonstration? Visit the website for more on COMBO’s future! 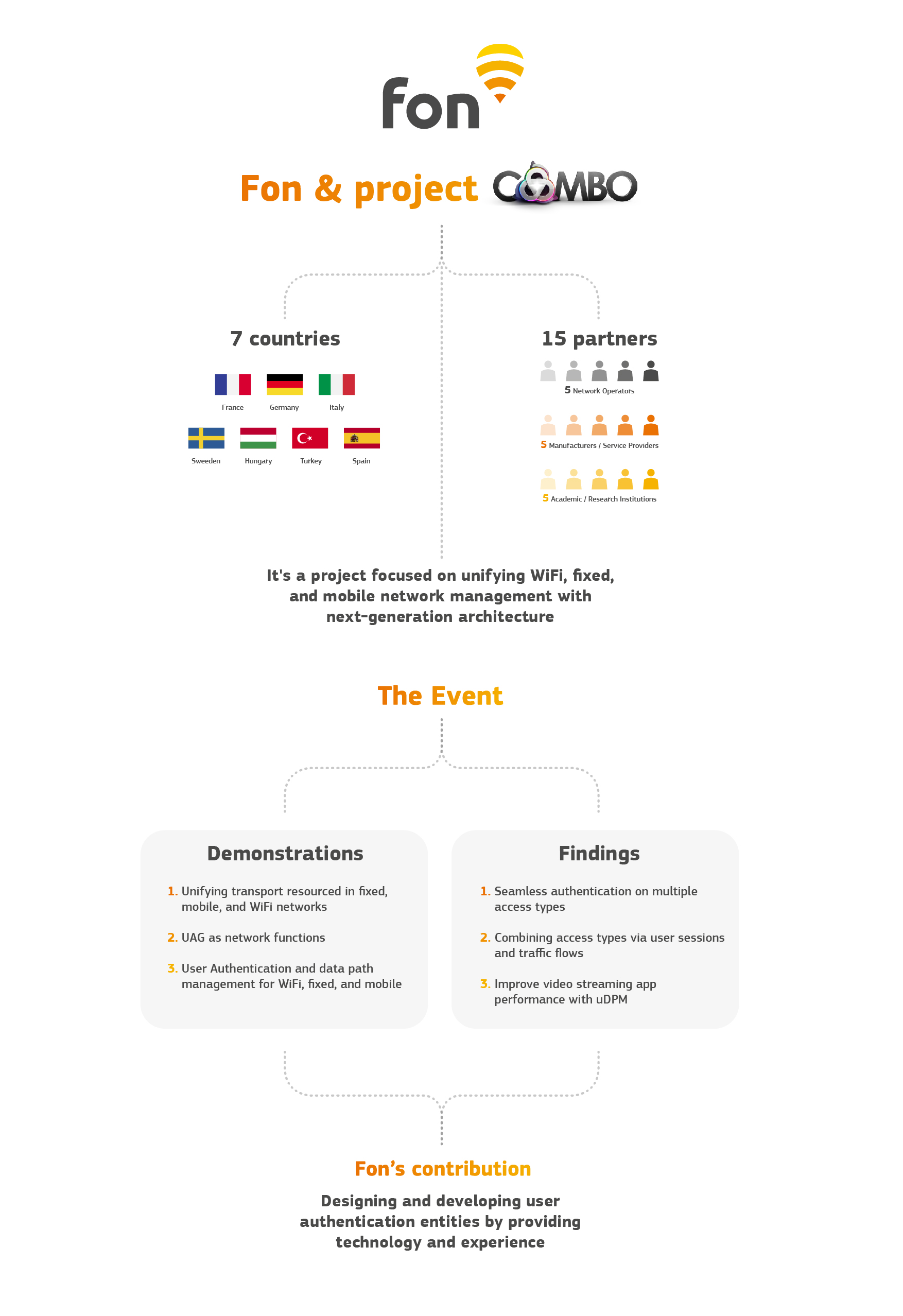